I’ve fallen behind my target by about 25 characters, so I’m going to work really hard the next week to catch up and hopefully give myself a little bit of a buffer, too.

I went home for Christmas yesterday and am taking a few days off work, so I’ll have plenty of time to study. 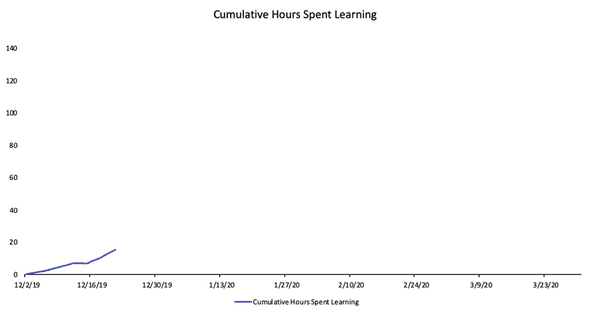 I’ve spent just over 15 hours learning characters. This doesn’t count any other time that I watched videos or did Duolingo, but I don’t feel like I learned that much doing those things anyway, so I decided not to include those hours.

I will be the first to admit that I’ve been neglecting other forms of practice and learning. Learning my characters has started taking 60-90 minutes/day and it has gotten really hard to work on other things like I planned to.

It’s also hard to learn grammar or pronunciation when I don’t know the characters. It feels like I’m just memorizing a bunch of pictures in addition to the grammar, which is pretty boring and not what language learning is about.

The Hard Parts of Chinese

All languages have trade offs. For Chinese, the hard parts are characters and tones. I’m doing one of these up front. The grammar is pretty straightforward. No verb conjugations, simple sentence structure. But the characters will kill a lot of people before they even start.

Russian, on the other hand, has an alphabet that seems scary but is actually quite easy to learn for an English speaker. The tough part is the grammar - declensions, gender, and verbs.

Spanish and French will give you trouble with their verbs, but it’s a little easier to memorize their vocabulary (at least I found it that way).

I haven’t really faced the “tough” problems that exist in Chinese in other languages.

When I studied Persian, I struggled with the writing system and stubbornly refused to learn it well - this taught me how important it is to embrace the tough parts of a language.

If you want to learn Chinese without embracing the fact that you must learn hanzi well, you’re setting yourself up for failure.

Learning Chinese characters is tough because they don’t really tell you how to say a word, so I’m essentially going to have to go through and learn all the words with their Chinese pronunciation. That’s why I set such an aggressive goal for myself - learn the characters thoroughly and super quickly so I can ramp up other language practice.