This is getting real hard. 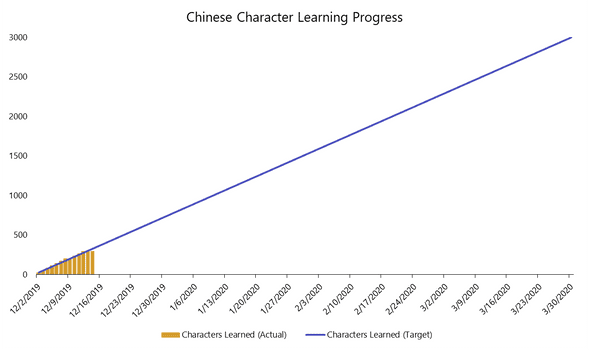 I read an estimate this week that 99% of words in a Chinese newspaper can be read knowing 3,000 characters. That’s great. At 99% comprehension, you’re able to make effective inferences based on context clues - something I want to write about later down the road.

I missed a couple days of Anki practice this week because I didn’t plan my time well. That happens, but I want to not miss another day for a couple weeks at least. I’m going to try and make up for that lost time when I’m home for the holidays.

My Anki sessions are taking noticeably longer now that I have reviews that are popping up. I now spend just over an hour doing Anki cards each day.

There are a few reasons it’s taking longer for me to review (beyond the fact that my overall number of cards has gone up):

First, I’m practicing writing the characters on paper when I’m prompted with the English keyword. This is something that Heisig recommends in his book, and I do too. I thought I might be able to skip this step, but it’s actually very crucial for active and honest learning.

Your brain is lazy and will cheat if you let it. After 100 cards, it’s easy to say “actually I think I knew that one, I’m just going to give myself credit for it” when you actually don’t have the character 100% right. It’s a lot harder to let that slide when the answer you wrote down on paper is clearly wrong. Plus, I feel that the tactile writing of the character makes me remember it better.

Second, I’m spending more time processing and visualizing stories and mnemonics that go along with characters. I didn’t do the best job of this in the beginning and it shows - I have the most trouble with characters that don’t have a clear visualization in my head.

Heisig talks about this in his book. One of the most dangerous thoughts you can have is “I’ll just remember this one.” Of course you won’t. Why would you?

This applies to most memory problems. I ran into this in other languages I learned too. Reality: your memory is never going to work as well as you think it will. Very rarely, if ever, will you “just remember it.”

It seems like a waste of time to spend an extra 30-60 seconds closing my eyes and forming a vivid image of what’s going on, but those characters are the ones that are easiest to recall. Doing a minute of work upfront will save you even more time and frustration dirty the tower when you continually fail to remember the same character.

I only did a little Duolingo and other work with Chinese this week since the character studying has picked up a lot.

That, and Duolingo has felt like a slog - it’s just too much repetition for me and I’m frustrated by how they train you on characters. It just feels like rote memorization when compared with the Heisig method.

That’s all for this week. Thanks for reading!