You can track my progress here.

I spent 12.5 hours learning characters this week. Anki reviews are starting to pile up again, but I’ve found a way to make them a little more manageable.

It’s not quite as effective because I can’t physically write the characters down as I’m studying, but it’s better than nothing.

All said, it’s taking me 45-60 minutes to make new mnemonics and another 30-45 minutes to do reviews.

Here are my takeaways from the week. 👇

Don’t Get Lazy with Primitive Elements

Since I follow James Heisig’s book, Remembering the Hanzi, I learn characters in the same order that they are presented in the book. I think this is probably fine, since he can take a higher level view and construct a more efficient path for the learner.

Heisig usually groups chapters that share similar primitive elements into chapters. While on the surface this seems like a good idea, it does present a challenge: when you repeat the same element over and over again, it’s easy to remember the words at first but harder in subsequent review days.

For example, one chapter this week (1-35), they key primitive was thread. Almost every single character in the chapter had the thread primitive element on the left hand side with one or two other primitives on the right hand side:

You get the picture. It became easy to fall into a pattern of just writing the thread element down and then trying to remember the other primitive.

As I said, this was fine for the first learning phase, but the cards got a lot harder the next day when they were mixed with my other review cards and I couldn’t rely on that pattern anymore.

It’s imperative to form a solid memory of the character independent of that pattern.

I’ve found it’s also super important to make sure I get the key primitives and characters right the first time I learn them. This means coming up with creative mnemonics that I can easily remember and physically writing them down so I actively engage my brain (instead of passively recognizing them in the book).

A couple times this week, I didn’t do that, and it came back to bite me.

One of those times was when Heisig introduced the primitive for snare. It’s kind of a deceivingly simple primitive; only a few strokes, doesn’t look complex. But it’s actually pretty hard to come up with a memorable story for it, especially since a snare isn’t something I actively think about. I should have practiced writing it on paper several times to help solidify my memory.

Anyway, there were times a few days later when I would be prompted for a character that I knew had the primitive “snare” in it, but I would fail the card because I couldn’t remember what that primitive looked like.

For example, when the word “adroit” came up, I knew the components were “work” and “snare,” but I could only remember what the primitive for “work” looked like. 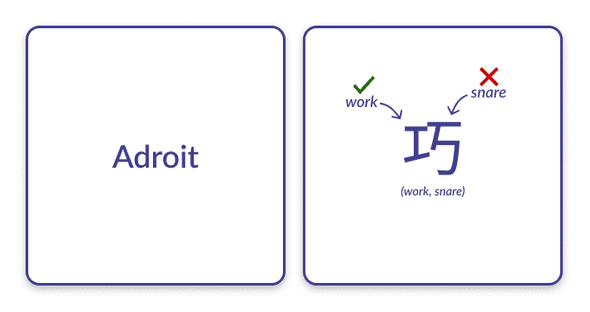 This is just a good reminder to make sure I get my foundation set with the key characters before I jump into other characters that use it them as an element.

That’s all for this week, thanks for reading! If you know anyone who likes to learn languages or is learning Chinese, please consider asking them to subscribe to my newsletter.