What is Ease Hell?

Ease Hell is when Anki thinks your flashcards are more difficult than they actually are, causing you to review too many cards each day.

Your cards’ intervals — the amount of time between reviewing a card — are too short. For this reason, Ease Hell has also been referred to as “Low Interval Hell.”

The lower a card’s interval, the more often you are going to see that card.

Anki’s algorithm is what modifies the interval; it tries to predict the optimal time to review cards, optimizing for as few reviews as possible while still letting you remember the information.

So what determines the interval?

One of the most important factors in Anki’s algorithm is the Ease Factor.

A card’s Ease Factor is a representation of how easy/hard Anki believes that card to be.

Each card starts off with an Ease Factor of 2.5. Anki updates the Ease Factor for a card after each answer. The lower the Ease Factor, the harder Anki thinks that card is. If you continually answer “Again,” Anki will keep knocking this card’s Ease Factor down until it reaches 130%, the lowest possible value.

Let’s look at an example to see how the Ease Factor is modified by Anki during reviews. 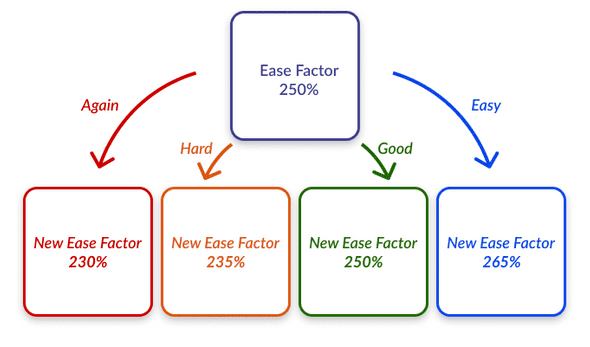 Can you see the problem here? Anki makes it too easy to tank your Ease Factor while at the same time making it near-impossible to increase that Ease Factor again.

Notice how in the following answer paths, it’s very hard to get your Ease Factor back to the starting point once you’ve forgotten the card a few times. Keep in mind that if you forget something, you’re probably not going to think it’s Easy the next time around, either. 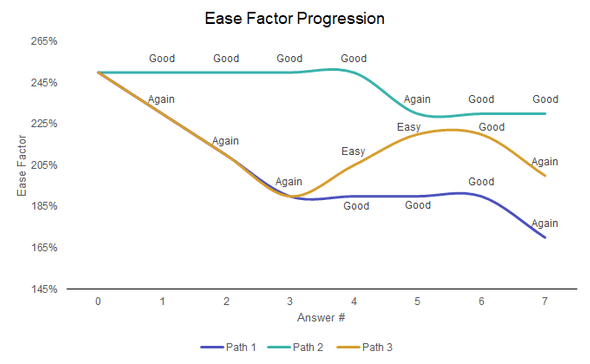 And once a card is beaten down to 130%, that means you’re going to see it more and more often forever!

When Anki determines the next interval, it will consider this Ease Factor, resulting in a low future interval (remember, Interval * Ease Factor = New Interval) and you won’t be able to get out of this terrible cycle.

With the default Anki algorithm, if you don’t press Easy on a card, you will be trapped at the lowest Ease Factor forever with 6 Again responses. This is true even if those Again answers aren’t in a row. They could come a day, a week, or even a month after one another.

If even a moderate amount of cards have an Ease Factor that’s too low, you’re going to be stuck in Ease Hell.

Why does Anki not have a good way to increase your Ease Factor?

This goes back to the algorithm’s assumption that each card has a inherently different difficulty level. Thus, it thinks that cards that are harder should fall to the bottom and stay there. Maybe this is true, but Anki is ill-equipped to figure out which cards are that much more difficult for the learner. Anki attempts to figure out which cards are harder by using the number of times you press the Again button.

But the learner answering Again is a poor indicator of how difficult a card is. Sure, there are some cards that are harder than others, but usually when you fail to remember an answer, it’s because you:

…and NOT because a card is more difficult by nature.

Anki should not penalize you in perpetuity for having a momentary lapse in memory. If you didn’t do a good job of memorizing it initially, you should be given the opportunity to show Anki that you have fixed that issue and that you actually do know the information well.

How to Escape Ease Hell

So what can you do to get out of Ease Hell?

First of all, there’s something that’s called an Interval Modifier. It simply increases your intervals across the board for all your cards, which counteracts the chronically low Ease Factors in your deck.

If your Interval Modifier is 150%, then Anki would calculate the new interval as normal (Interval * Ease Factor = New Interval) and then multiply that answer by the Interval Modifier. You can see that this sort of gets you a similar result as having better Ease Factors. The problem is that this fixes a symptom rather than the problem.

It will also extend out the cards in your deck that you know well (and that have a high Ease Factor) - perhaps this is okay - but it’s something to keep in mind.

Reset Your Ease Factor for All Cards

Another option is to simply reset all your cards to the default Ease Factor (250%). There is a handy plugin that will do this for you, which you can find here. Of course, the same problem will exist in the future - if you miss a card a three to five times, you’re going to have a very low Ease Factor again.

With the default settings, Anki will treat any missed card as a brand new card. That is, it will knock your interval down to one day (it will also knock your Ease Factor down). I have found that it is usually overkill to do this. After all, if you forget a card that you memorized well 3 months ago, you could have just had a brain fart and missed it once that day. In that case, it makes more sense to see it again in 18 days rather than 1 day.

I set my Anki New Interval to 20%. A missed card’s new interval will therefore be 20% of the old interval. In the case above, it would use 18 days (20% of 3 months) rather than the default new interval of 1 day.

I send language learning tips and updates every Saturday.